Shannon Sharpe called out Shaquille O’Neal on ESPN’s First Take after his comments on LeBron James and where he has been for the last six or seven years.

Shannon Sharpe called out Shaquille O’Neal for saying nobody fears LeBron James. “Where have you been for the last 18 years?” he asked. 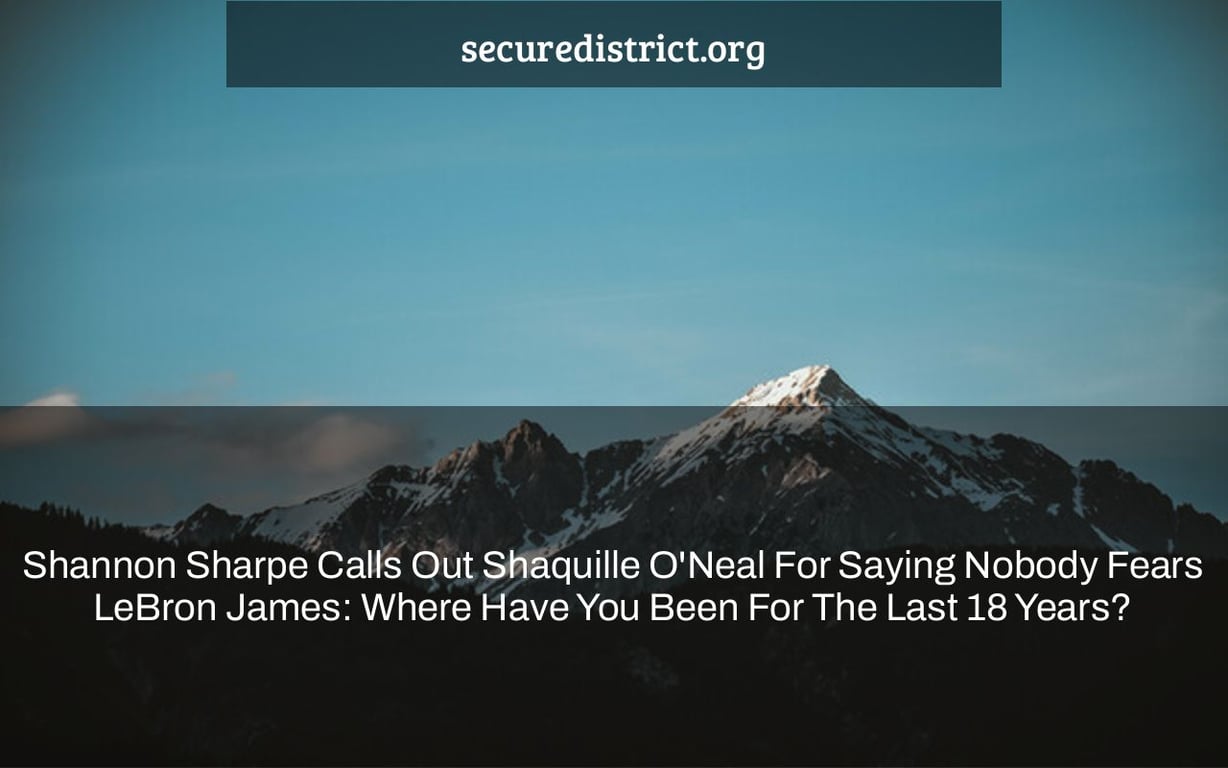 Shannon Sharpe was offended by Shaquille O’Neal’s statement that LeBron James isn’t feared by his opponents. The King has adopted a unique approach to opponents, always putting up a nice show, attempting to assist the younger generation, and generally acting like a calm veteran.

That doesn’t mean he isn’t attempting to demolish his opponents and rack up as many victories as possible. In the current NBA, it seems that this is a major basis for Shaq to claim that no one fears LeBron.

During a recent episode of “The Big Podcast with Shaq,” the four-time NBA champion said that although everyone admires LeBron, no one fears him.

“Although LeBron is my favorite player, no one has ever been afraid of him. So, if you’re not afraid of a man, you’ll have a lot more self-assurance. It’s risky to play with that person. They respect him, but they aren’t afraid of him, as I can see from watching him play against them.”

Sharpe replied to these statements by chastising Shaq for stating that and deconstructing a handful of scenarios that he feels LeBron James manufactured. Shaq was ripped apart by the former NFL player-turned-analyst, who even reminded him of some of his worst defeats.

“How can a man reach ten finals in over two decades and have no one fear him? It was called “LeBronto.” So LeBron James was never a threat to the Toronto Raptors? Is that what Shaq is attempting to convey?”

“In 2007, LeBron James led the Cleveland Cavaliers to victory against the Detroit Pistons, a team that was severely undermanned at the time. Hey, Shaq, here’s some information for you: you don’t believe the Detroit Pistons feared him when they upset you in the finals and ended your reign in LA?”

Sharpe also said that when a 22-year-old LeBron James led the Cleveland Cavaliers to the NBA Finals, the Boston Celtics formed their superteam. They teamed up with Ray Allen and Kevin Garnett to create a championship-winning trio the following season. He also mentioned the Warriors bringing in Kevin Durant as a result of LeBron’s anxiety.

“If no one feared Kevin Durant, why would the Golden State Warriors get on a plane and bother him in the Hamptons? This is why they assembled this superteam. They keep bringing up LeBron, but Boston had a Big Three in place long before he moved to Miami. Why? Because they were afraid of him.”

Shannon then addressed Shaq’s recent statement that Giannis Antetokounmpo is more feared than LeBron James, taking potshots at the Big Diesel for neglecting the Los Angeles Lakers superstar for the last 18 years.

“Shaq and I are diametrically opposed. He keeps mentioning Giannis and how he’ll be coming down the hill… Is there anybody who can drive the ball to the rim faster or harder than LeBron James? Where have you been for the last 18 years, Shaquille O’Neal? For the last 19 years, LeBron James has been doing what Giannis is presently doing. Shaq, on the other hand, seems to have forgotten about it. How?”

Sharpe went on an amazing tirade about O’Neal, who played in Cleveland with LeBron James and has a terrific connection with him. Despite this, O’Neal believes Giannis is the league’s most feared player right now, surpassing LBJ.

LeBron has a well-deserved reputation in the NBA. He’s a threat, and despite the fact that he prefers to play smarter rather than harder, many people recognize that he may have a significant effect and influence game outcomes. Perhaps his present situation has impacted people’s perceptions of him, but there’s no question that meeting LeBron James was terrifying.